· Taiji Akademie
· Training in the Park

· How will you learn Qigong at our academy?

1) Qigong Standard Training, as many hours per week as you’d like
Participate as often as you’d like in the regular hourly sessions each week for Qigong and Taijiquan. You’ll learn simple and more complex forms of Qigong like the Qigong exercise of 49 movements to stimulate Qi in the meridians or the Lungdao Qigong. You can also take part in the hourly sessions each week for Taijiquan.

2) Qigong Basic Training, 1 hour per week
Main focus here is on meditative, internal Qigong exercises and simple, traditional and medicinal forms. The basic training is especially interesting if you only have time once a week but still want to experience Qigong’s relaxing and health-promoting effects.

3) You can select a training program to become a Qigong teacher
together with our cooperation partner ChinBeKu at the Advanced Technical College for Sports in Cologne (Sporthochschule Köln).

4) Private Lessons
Facilitate and support your training, broaden what you’ve learned in the group so far or if your schedule is so busy that you cannot participate in the hourly group sessions.

5) We consider ourselves to be an academy
That is, we do not only offer courses, teaching material and professional literature in order to give those interested deeper insights into Taiji and Qigong. Another one of our key objectives is to conduct ongoing research, to further develop and to roll Taijiquan out in Germany and Europe.

Enter the world of Qigong and get to know us during a free, non-binding, 2-week introductory course. You can also participate in all trainings during this period, and of course, in the weekly hours for Taijiquan, too.

We very much look forward to welcoming you!

The Chinese respiratory and health system, Qigong (Chi Kung), enjoys an extraordinarily top-notch reputation and it is widespread today in all corners of the globe. It is tailored around the same principles on which traditional Chinese medicine, meditation and martial arts are based. 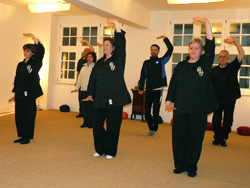 Thanks to proper breathing techniques and physical movements that are sometimes gentle and soft and sometimes hard and strong, Qigong brings the human energy system back into perfect harmony. It has scientifically been proven that people who practice Qigong on a regular basis go through life with more strength, more energy, and they’re more relaxed both physically as well as spiritually, and healthier in all other aspects, too.

"Working with energy" is the translation of the Chinese term Qigong. Qi (Chinese for energy) is not understood in this context as measurable energy in any type of form such as electricity. Rather, it is interpreted as the vital life energy (Indian: Prana) or as the "Inner Strength," with which, for example, work is also conducted in the field of acupuncture. The Qi concept is nothing new for us as Europeans. The old German term Odem, the Latin Spiritus and the Greek Pneuma are all very similar to the Qi concept. Other orthographic forms of Qigong include: Qi Gong, Chi Kung, Chikung, Chigong, and Chi Gung.

A vast array of Qigong forms exist. The easiest way to differentiate between them is to classify them according to static Qigong (Jing gong) and dynamic Qigong (Dong gong). Static Qigong uses stationery postures such as lying, sitting or sometimes also while standing, and with imagination and tranquil breathing. Dynamic Qigong normally entails exercises throughout all channels of the body with slow, but sometimes also with rapid and powerful movements.

Both forms of exercises have one thing in common: the attention that is dedicated to intensive breathing and to the guidance and steering of Qi. Depending on the usage, breathing is sometimes strong and sometimes soft. Whereas a powerful, dynamic way of breathing tends to be practiced more in martial arts or during the warm-up phase, tranquil breathing takes place when the movements also become more peaceful or respectively when exercises are performed while sitting or laying down.
The right breathing technique and correct bodily posture are the keys to a successful Qigong training, which is why they are always practiced intensively over and over again.

Qigong is understood as a path to enhancing the quality of life at our Taiji Qigong Academy (YANG SHENG DAO). Not only do we offer the strengthening, energy-giving, harmonizing, physically and spiritually relaxing exercises that make up a holistic healthcare training program with Qi Gong, but we also integrate stretching and gymnastic exercises (Daoyin), nutritional lessons, traditional Chinese medicine (TCM) and spiritual meditation, so that everyone who practices on a regular basis can go through life healthier in all areas (physically, spiritually, emotionally).

From a historical perspective, Qigong was most likely developed due to three main reasons. One is undoubtedly war-related. Centuries ago, soldiers were fortified and strengthened by means of Qigong exercises so that they could withstand action on the battlefield more effectively. 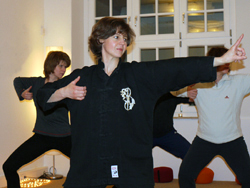 These exercise systems can still be found today in some martial arts, where they’re generally practiced in the so-called external or hard form. Furthermore, Buddhist and Taoist monks designed Qigong systems to create a comparable alternative to sedentary meditation and also to stay energetic and healthy.
And last but not least, Chinese physicians had long since pinpointed the healing aspects of the highly diverse breathing techniques and gymnastic methods (Tuna/Daoyin) that Qigong has to offer. Documentation is not precise as to exactly when Qigong was developed. However, an array of sources indicate that it goes way back to the (mythological) Yellow Emperor period. That is, first skills were probably already developed by monks and physicians three thousand years before our computation of time. The Qigong forms of exercise with a preventive medicinal background are the ones that we are most familiar with today.

After the Communist takeover of China and, in particular, during the Cultural Revolution, Qigong was partially banned in China as a rampant superstition. However, it has been experiencing a flourishing renaissance in China as well as in the Western hemisphere for quite a few years now. It has therefore been accompanied by the further development of medicinal Qigong, which, for example, is why numerous clinics now deploy Qigong with tremendous success as a supporting therapy. Today, certain clinics in China are applying Qigong as their one and only therapeutic method and their success rate is substantial.

The Dragon’s Breath (a form of Yijinjing)
A form of Qigong that alternates between tension and ease of tension and that strengthens the muscles and tendons as well as the tissues and bones. The deep posture and intensive breathing techniques are characteristic for this exercise. This form was crafted in the historical Shaolin Monastery (China) to strengthen the monks and to maintain their good health.

Ba Duan Jin
This is one of the oldest and most well-known forms of Qi Gong exercises. Translated word for word from Chinese, Ba Duan Jin means "The Eight Pieces of Brocade." It is a series of exercises that had most likely been developed by the Chinese Marshall Yüe Fei (12th century). These eight exercises were considered to be almost as valuable and precious as the Emperor’s silken brocade garments themselves – and that’s how Ba Duan Jin got its name.

The Iron Bridge
This exercise harmonizes the Yin and Yang forces. It moreover activates the small and large circulation of energy.

5-Element Qigong
This form of Qigong addresses the five phases of transformation and the relevant organ spheres of function (Meridians) which are inherent in our system.

The 6-Healing Sounds
The 6-healing sounds is a Daoistic Qigong technique that dates back far into ancient history. Each healthy organ and each healthy organ sphere of function (Meridian) has a specific oscillation. The sounds and corresponding exercises harmonize and bolster these health oscillations.

Static Qigong (Jing gong) A meditative, internal form of Qigong that only guides and steers the Qi by means of attention and without any physical exercises. 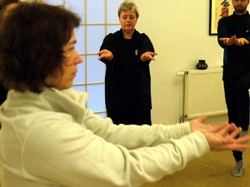 movement flows and meditative/spiritual elements into a holistically effective, preventive healthcare exercise.
By selecting the exercises specifically, the Qi flow (vital life energy) is toned, stimulated and – first and foremost - harmonized. In this way, the body’s defense mechanisms are strengthened and the immune system is stabilized.

The 49-Channels Qigong has scientifically been proven to be effective, especially for disorders of the heart/circulatory system, the digestive organs, the vascular system, the respiratory organs (lungs/bronchia), the back and general infirmities and lethargy. In China, this form of Qigong is applied for preventive healthcare, rehabilitation and healing. It was authoritatively developed by Zhang Guang De, Professor for Qigong at the Physical Education College in Peking.

Qigong for the Brain, Eyesight and Hearing
Who doesn’t want to be clear-headed and be able to hear and see well on up into a very old age? This form of Qigong alleviates headaches, maintains vision and strengthens your sense of hearing.

Taiji - Qigong Shibashi
The "18 Movements of Taiji Qigong" consist of a mix of a wide array of Taijiquan and Qigong exercises. These are understood as a comprehensive system unto itself that spans health-promoting movement flows and postures, breathing techniques and dynamic meditation.
Characteristic for this form are the comparatively simple, easy-to-learn, smooth, graceful and elastic movements that stem from the ease of tension/relaxation. In this context, the breathing flows naturally and smoothly in precise tune with the bodily movement from a peaceful and tranquil spirit. That’s why this type of training has a sustainable, positive impact on the health.
This set of exercises is also ideal to gain first insights into the Taijiquan system.

Meridian Stretching Exercises (Daoyin)
The meridians are stretched and activated with a broad spectrum of techniques.

Xin Gong, Qigong for the Heart
The heart sphere of function (also called: Heart Meridian) can be debilitated due to excessive stress and emotional trauma. The heart in traditional Chinese medicine (TCM) is considered to be just as vital as the Emperor himself, which is why it rules and influences the other 12 Meridians and is therefore responsible for the overall sense of well-being.

The eight exercises of Qigong for the heart dissolve energy blockades, soothe and calm mental and emotional hyperactivity, regulate the blood pressure and strengthen as well as harmonize the heart and circulatory system.


﻿
Take care of your body. It’s the only place you have to live.
Chinese Proverb
· Learn Qigong
· Background
· Historical
· Traditional forms
· Medicinal forms