· Taiji Akademie
· Training in the Park

· How will you learn Taijiquan at our Academy?

2) Taijiquan – Basic Training, 1 hour each week
You can practice Taiji to relax, stay in shape and to improve your health. Main focus during this training is on simpler forms of Taiji like the 18 Taiji-Qigong movements, the 8-short form as well as on the 24-Peking form and easy-to-learn partner exercises.

3) You can select a training to become a Taijiquan teacher
together with our cooperation partner ChinBeKu at the Advanced Technical College for Sports in Cologne ("Deutsche Sporthochschule Köln") and during the weekly exercise groups in Krefeld.

4) Private Lessons
To facilitate your training, to broaden what you have learned in the group or if your schedule is so busy that you cannot participate in the hourly group sessions.

5) We consider ourselves to be an academy
That is, we do not only offer courses, teaching material and professional literature in order to give those interested deeper insights into Taiji and Qigong. Another one of our key objectives is to conduct ongoing research, to further develop and to roll Taijiquan out in Germany and Europe.

You will be amazed to discover how much passion for life and inner satisfaction you will get from this ancient yet highly modern form of martial arts. Enter the world of Taijiquan and get to know us during a free, non-binding, 2-week introductory course. You can participate in all trainings during this period and, of course, in the weekly Qigong hours, too.

We very much look forward to welcoming you!

Taijiquan, also called Taiji or Tai Chi Chuan (T'ai-chi-ch'üan, T'ai-Chi-Ch'uan), is an ancient martial art that was developed in China in which movements gradually and flowingly arise from the easing of tension. Taijiquan’s developmental history most likely started to take shape in the 15th century; however, the so-called internal style had already been designed and put into actual practice long since then in China.
Over the course of the century, Taijiquan (Tai Chi Chuan) experienced major changes with regard to the type and manner of its performance. The most explosive and strength-driven movements were eliminated. In contrast, sharper emphasis was placed on the smooth, limber and graceful components. In this way, Taijiquan increasingly transformed itself into an "internal martial art" – a martial art that can promote the "inner strength" or respectively vitality (the Chinese Qi) and that can lead to personal maturity and robust, good health.
Whereas combative partner training (Tuishou) is highly popular in China and, in particular, with the younger Taiji practitioners, this combative aspect is frequently secondary as opposed to the health-promoting, relaxation and personality development aspects that are most important to us in the Western world. Today, six traditional styles are mainly practiced in Southern and Western Europe: the Yang style (the most prevalent), Chen, Wu, Wu-Hao, Wudang, and the Sun style. 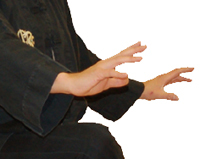 Thanks to the movements that are performed slowly, fluidly and flowingly, Taijiquan (Tai Chi Chuan) is an excellent, active meditation exercise with a positive impact on feeling great about your body, improving your concentration, reducing stress, ensuring an inner and outer peace of mind, and the list could go on and on. You can also perceive it as a holistic healthcare system that harmonizes and makes the Qi, i.e. our vitality (also called: "inner strength") flow smoothly again.

Taijiquan is often described as the art of moving from your own center in perfect harmony with nature. In doing so, the movements are slow, flowing, and they are triggered by the ease of tension. By the way, relaxation does not translate into feeling weak or powerless. For one, relaxation means: shedding all tension and stress, and especially the sole, physical strength. However, relaxation – first and foremost - means: coming to peace with yourself, becoming serene, calm and composed, and focusing your full attention on what is happening "at this very instant." And then – entirely in the context of the Yin/Yang philosophy, you move from peace and tranquility over to movement and in the movement is where tranquility interlinks again. 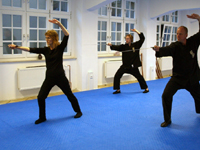 Taijiquan is one of the so-called internal Chinese martial arts (Chinese: neijia). Other internal martial arts include, for example, Baguazhang and Xingyiquan. The Daoistic Principle – according to which the soft prevails over the strong – especially holds true with regard to Taijiquan. That is why with Taijiquan less importance is specifically placed on dexterity, physical strength and speed. On the contrary, the exploring and steering of the inner strength (Qi) is honed and cultivated to such an extent that you seem to be able to move entirely from this inner source of strength alone. This is initially experienced during the training and then increasingly in your day- to-day life. The development of the inner strength (Qi) should primarily serve to promote your health and personality development, however, you should be able to put it to good use in combative situations, too. For a Taijiquan master, the inner strength (Qi) and inner tranquility should be so obvious for a potential attacker to see that he or she will never actually need to deploy his/her martial art skills because nobody would want to fight with him/her. However, for the sake of completeness, we must mention that a wide array of so-called external martial arts also apply this principle. At this point, we will only mention Zen-Shorin-Ryu karate and Chuan-Fa.

· The 10 basic rules according to Master Yang Chengfu 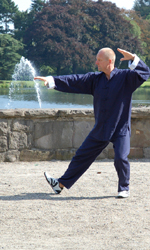 · Hold your head up gently and naturally
· Relax your elbows and gradually let your shoulders move downwards
· Your breast and back should be relaxed
· Ease the tension from your waist
· Distribute your weight the right way (fullness/emptiness)
· Bring your upper and lower body into harmony
· Your movements should flow
· Your spirit and body should harmonize
· Use Yi (intention), and not sheer power (muscle power/brawn)
· Search for tranquility in movement and your movement in tranquility

﻿
Whoever practices Taijiquan correctly and regularly, will gain the pliability of a child, the health of a lumberjack, and the peace of mind of a sage.
Chinese Proverb
· How to learn
· Background
· Health aspects
· Meditation
· Martial arts
· 10 Rules